A golf rangefinder uses a laser beam to accurately measure distance and slope to a target on the golf course. The laser beam hits the target and is reflected back to the rangefinder, providing an accurate measurement.

As the laser beam travels at the speed of light (186,000 miles per second) this all takes no discernable time.

The target is typically the pin, a hazard or simply just where you want your golf ball to end up next, such as a dog leg on the way to the pin.

When Should You Add a Golf Rangefinder to Your Kit?

The Best 3 Golf Rangefinders for 2022

All three of these golf rangefinders have any number of 5-star reviews from verified Amazon purchasers.

But they are aimed at very different price points.

The Bushnell Pro XE Golf Rangefinder is "simply the best" (but with a price tag to match). It's the one to get (whether for yourself or as a gift for your significant other) when only the best will do. Or if you're willing to amortize your cost over the many years of playing pleasure that it's going to give you.

This is what it looks like. To find out more about the Bushnell Pro XE Golf Rangefinder and to read its 5-star reviews, click on its image below. 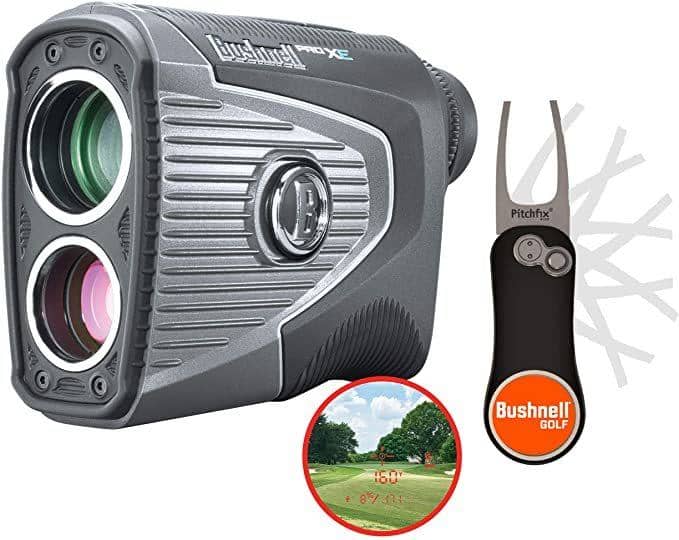 Our Recommended Golf Range Finders for 2022

One of the most significant advantages added to all our recommended golf range finders in recent years is the ability to measure slope and take into account its effect on how far the golfer needs to hit the ball and, as a consequence, the correct club to use for the shot as well as how hard to swing.